What does it mean to be an advocate for your future profession? Members of the USC Occupational Therapy Student Council saw the opportunity in the recent American Occupational Therapy Association Assembly of Student Delegate election to increase student voter involvement, while also educating fellow students of the importance of being an active voice as a member of the association. OTSC hosted voting booths on campus at times convenient for their peers to vote online or to ask questions about the election process.

“We noticed that a lot of students didn’t know about the Assembly of Student Delegates,” explained second-year master’s student and OTSC Treasurer Susan Lingelbach. “It is important for the students to elect these people to communicate student concerns.”

Providing voting booths was an obvious way to reach the student population while avoiding the typical barriers of limited time and distraction from other obligations, while also giving students a convenient, accessible location for voting.

As far as those involved are aware, this student initiative is unique to the USC Division of Occupational Science and Occupational Therapy. “USC has always supported student involvement in the national and state association,” described second-year master’s student and OTSC AOTA ASD Representative Sean Sullivan. “The student support was new this year, and is an exciting shift in the student culture.”

This support and representation of the USC student body was felt around campus as students donned “I VOTED for AOTA 2013” pins to remind others to also vote. Faculty also became involved in spreading the word and many also wore pins throughout the voting process. The change in atmosphere was exciting as students became more invested in the role they carry in the association.

“Voting is empowering and creates a connection between you and AOTA,” shared first-year student and OTSC AOTA ASD Representative, Colin Lenington. “This helps students want to remain members and to take ownership of the contributions they can make.”

Students hope to continue to facilitate an atmosphere of empowerment for following classes by establishing annual voting booths for elections. When asked about goals for subsequent elections, Lenington stated he “hopes to educate the incoming class early on and to continue to facilitate this culture of excitement about professional advocacy and involvement in the professional associations.” 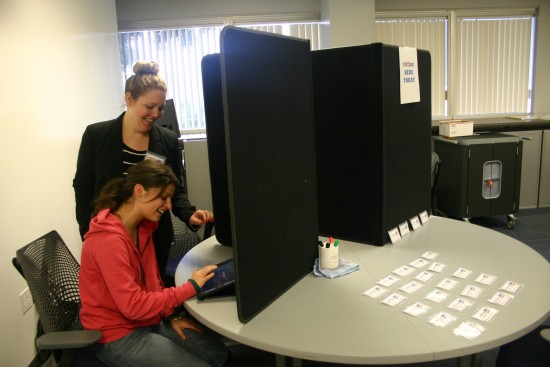 Next is Clark Delivers 2013 Mosey Lectureship at NYU Steinhardt >