Stefanie Bodison ’92, MA ’93, OTD ’10 is the latest in a long line of USC experts, stretching back more than 50 years to former USC faculty emeritus A. Jean Ayres ’45, MA ’54 and her landmark theory of sensory integration, seeking to better understand the relationships between sensory information and children’s neurological capacity for effectively using that sensory “input” for “output” movements and behaviors.

But unlike a previous generation, not only is Bodison armed with state-of-the-art neuroimaging technologies that provide measurable views of the brain and body at work, she also has grant funding to help her realize her mission. 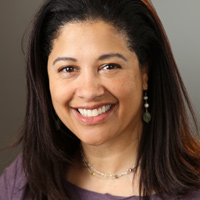 A research assistant professor at the USC Chan Division, Bodison is using various brain imaging techniques including functional magnetic resonance imaging (fMRI) to assess the structural and functional connectivity of sensorimotor integration — the term describing the brain’s ability to transform sensory information into a motor response — in both typically developing children and those diagnosed with autism spectrum disorder (ASD).

Because this complex process is dependent upon one’s ability to copy or imitate the movements of others, the latest phase of Bodison’s project, entitled “Investigation of the Neural Mechanisms of Sensorimotor Integration,” uses fMRI to examine the neural processes occurring during both hand gesture imitations and simple motor response tasks.

While positioned within the fMRI scanner, ten participants — 6-to-8-year-old, right-handed boys, six of whom have a diagnosis of ASD and four of whom are typically developing — were asked to imitate complex, meaningless hand gestures displayed on-screen and also to make either a simple “thumbs-up” sign or “number-one” sign with their hands in response to directional arrow cues displayed on-screen.

The fMRI images from this small sample suggest that, for children with ASD, a simple motor task requires the same extensive degree of motor planning as does the imitation of a complex, meaningless gesture. This suggests that the sensorimotor integration pathways in the autistic brain may contribute to the difficulties demonstrated by children with autism when learning new tasks requiring imitation of others.

This pilot study also demonstrates a new paradigm for the capability of fMRI to measure the neural substrates of sensorimotor integration in the brain.

“Our research team has shown that we can successfully acquire MRI scans in six-to-nine-year-old children with autism,” said Bodison, “which is significant because most of the current MRI research in autism is happening with individuals who are 12 years and older.”