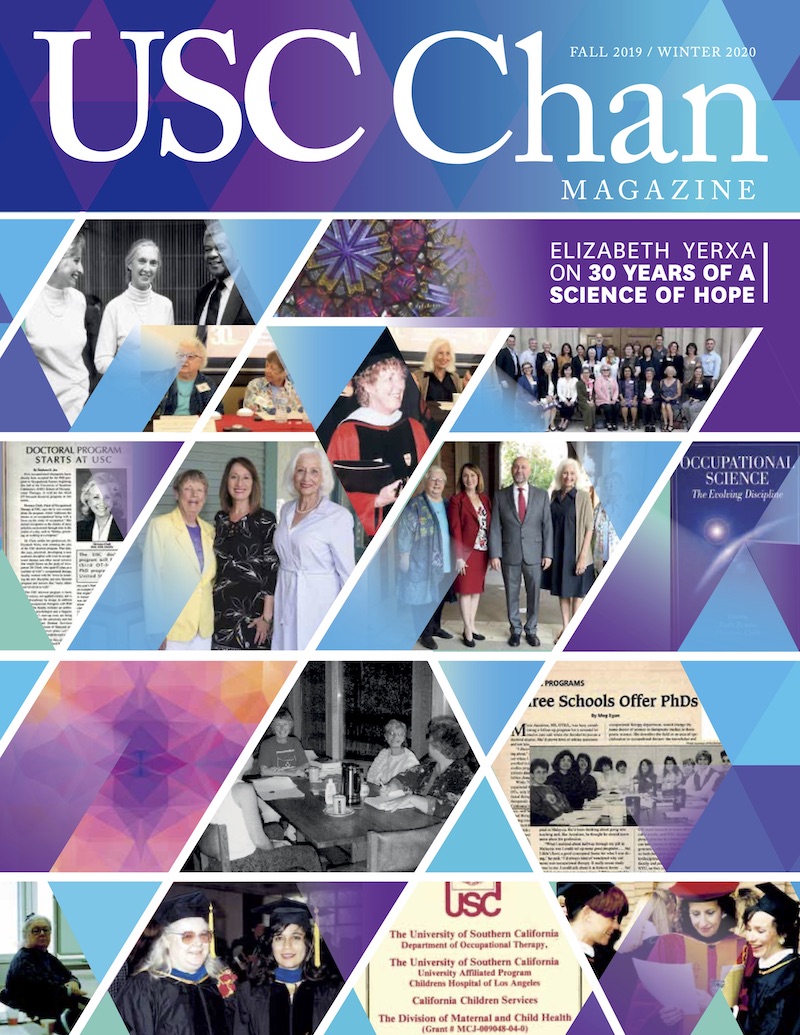 With the help of Keck Hospital of USC occupational therapists, comedian Eddie Barojas is getting back to joking around.

Not many patients cap off a month-long hospital stay with a stand-up comedy routine before a room full of patients and providers.

“I had a joke about how when I first came to the hospital I couldn’t do one push-up, so if I tripped and fell face-first into a puddle, I’d drown,” says Eddie Barojas, 42. “Everyone started laughing, and I got chills. To tell jokes and get that feeling again — to start feeling normal again — it was really emotional.”

For six years, Barojas could barely stand, let alone do a push-up. In 2013, the once prolific performer developed severe scrotal lymphedema, a buildup of fluid that causes swelling of the genital area.

In a matter of weeks, the lymphedema got so large that the promising actor and comedian went from appearing on the popular CBS sitcom Mike & Molly to being confined in bed.

“It got to be almost 50 pounds, or the size of a large watermelon,” he says. “I couldn’t walk; I couldn’t wear clothes; it completely interfered with my daily life.”

Barojas sought help from several providers to treat his condition.

“I stopped counting after seeing about 35 specialists,” he says. “I could never get a direct answer as to what caused it and what would make it go away. Until I finally met the people at Keck — I don’t know why I met them so late.”

Last year, Barojas saw Leo Doumanian, associate professor of clinical urology at the Keck School of Medicine of USC, who was able to develop a treatment plan.

To remove the mass, Doumanian performed the first of two surgeries in February of 2018, removing about 25 to 30 percent of the lymphedema. The surgery was so extensive that Barojas needed a year to heal.

In May of 2019, Doumanian and his team performed a second surgery to remove the remaining lymphedema.

“He basically freed me of this thing I’d been carrying around for six years,” says Barojas.

Though the surgery was a success, Barojas was left with extensive wounds, not to mention the damage that the mass had caused to his body over time.

A few days following his procedure, Barojas was admitted to the Inpatient Acute Rehabilitation Unit (IRU) at Keck Hospital of USC for an intensive rehabilitation regimen to regain his independence.

“I had no endurance — I could barely stand or even sit,” he explains. “They wanted to get me back into my life again.”

Working out a new type of routine

The three-week inpatient program included three hours a day of intensive therapy services — a combination of occupational and physical therapies — five days a week, as well as care from other medical professionals, including lymphedema and wound care specialists.

“It’s a truly collaborative effort with an interdisciplinary team,” says Lucy Hosoda MA ’16, OTD ’17, assistant professor of clinical occupational therapy at the USC Chan Division and Barojas’ lead occupational therapist. “The structure of our program is very unique, so we see patients from all over the state.”

While the team treats a plethora of diagnoses, including post-transplant patients and those with a range of neurological and orthopedic conditions, Barojas’ case proved unusual even for the Keck IRU.

“We’ve seen patients with variations of his diagnosis, but Eddie was young and so impacted, being homebound for so long, that was unique,” Hosoda says.

Going into rehab, Barojas didn’t know what to expect in terms of progress.

“Being able to get up and walk was my main goal,” he says. “Then to see what [the team] was offering and how they were going to help me, it went completely above and beyond any of my expectations.”

Prior to surgery, Barojas required assistance with instrumental activities of daily living, including showering, dressing, shopping, cooking and cleaning.

“Our goal for occupational therapy was to facilitate his return to these roles and routines,” Hosoda says.

Barojas’ occupational therapy sessions included exercises and techniques to improve his balance, endurance, sitting tolerance and his ability to stand and walk for longer and longer periods of time.

The IRU has a simulated home environment that allows patients to practice these skills so they translate to daily life. For example, Barojas’ work on standing endurance could carry over to occupations such as standing at the sink while brushing his teeth. These simple routines were a welcome return to normalcy for Barojas.

“It’s really odd what your body forgets over time,” he says. “I almost forgot how to shower correctly, to walk correctly, to clean.”

The occupational therapists also fashioned several pieces of adaptive equipment to set up Barojas for success, from a wheelchair he could use for showering, to tools to help while dressing.

“Each time I wasn’t able to do something, [the team] never gave me the opportunity to say, ‘No, I can’t do this,’” he says. “They always had something or would make something to help. They were two steps ahead of me, and that helped me to think of solutions for myself after I came home.”

During his treatments, Barojas strived to match that positive, resourceful attitude. For instance, when physical therapy providers would request 10 leg lifts, Barojas would do 11.

“Whatever I was asked to do, I wanted to give one extra and not give up,” says Barojas. “The staff was absolutely amazing. I could literally cry thinking of how well they treated me.”

Once the Keck team discovered he was a stand-up comedian, they planned a special send off, even creating a flyer to promote Barojas’ performance.

“That was something Eddie was really passionate about; he showed staff videos of him performing,” Hosoda says. “He didn’t realize we’d be able to do something like that in our unit.”

During the show, Hosoda got to see the phenomenal progress Barojas had made over a few weeks.

“To go from not being able to sit up, to doing something like that was really exciting and special for the staff to see,” she says. “A lot of the patients said they felt inspired, especially those earlier on in their treatment, to see someone so independent.”

Now living back at home, Barojas continues to focus on getting stronger, eating well and losing weight.

“I still use the tips and techniques I learned at Keck every day,” he says.

In the coming months, Barojas plans to return to the stand-up stage and hopes his providers will once again be in the audience.

“I’d love to invite them to a real show at a real comedy club, to see me back up there and know that they’re the reason,” he says. “They are amazing people that truly motivate you and care about you; they are angels willing to go above and beyond; that’s what Keck was: angels who went above and beyond.” 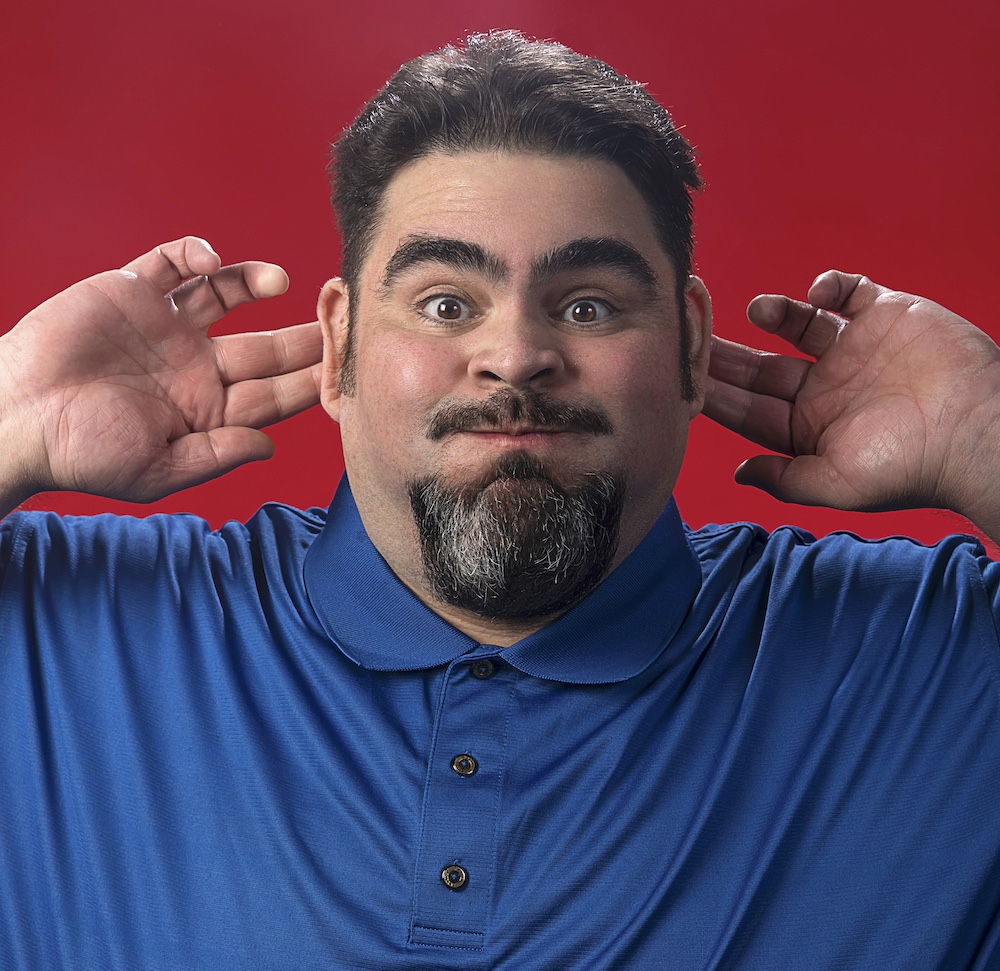