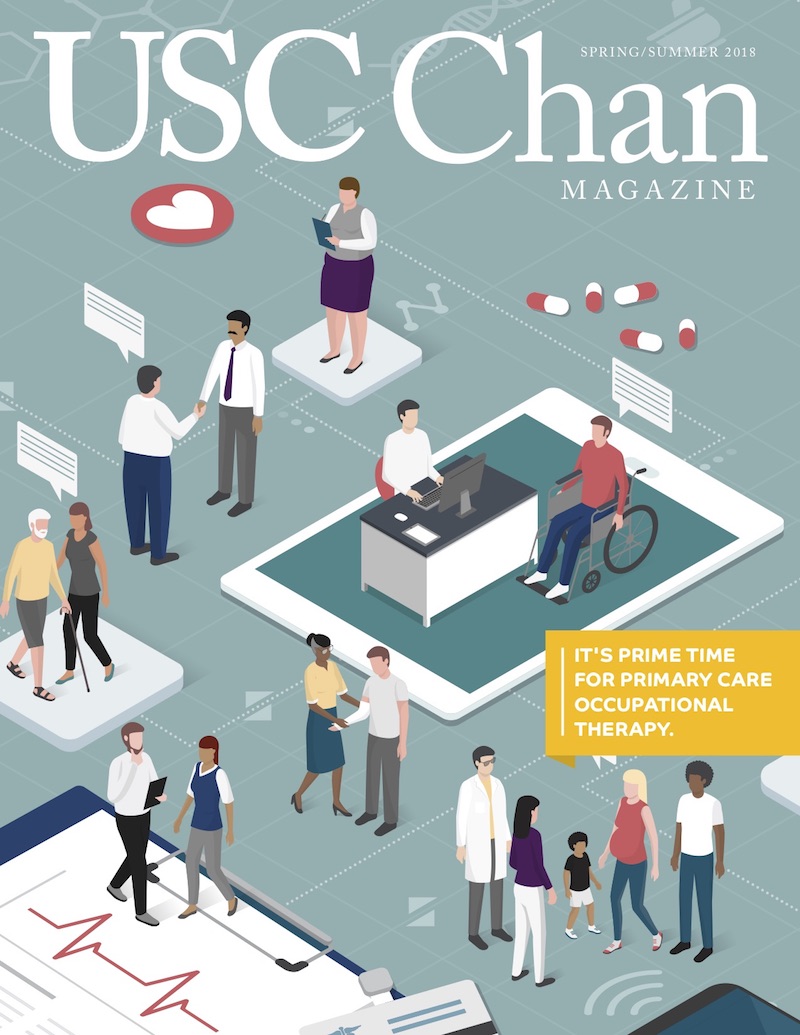 Keck Hospital of USC helps guide a newly widowed patient through its comprehensive continuum of care.

George Benton, 88, lived for his wife, Norma. Theirs was a 63-year love affair.

After she was diagnosed with dementia two years ago, Benton renovated their home for better accessibility. Other than a caregiver who came in three hours a day to help, he took care of Norma’s every need.

Last December, Norma took an accidental fall, broke both legs and was off to a rehab facility. On Christmas Eve, she came down with the flu, which Benton also caught while visiting her. Norma developed sepsis and was sent to Long Beach Memorial Medical Center. Weakened by the flu, Benton fell at home and was taken by ambulance to Long Beach Memorial. As he was being admitted to the emergency room, Norma passed away in her hospital room upstairs.

Thus began a long road to recovery, both physically and emotionally for Benton, one in which Keck Hospital of USC would play a big part.

“I spent eight days at the hospital with the flu,” Benton says. “Then they transferred me to a rehab hospital in Huntington Beach. I was trying to get well enough to go to [Norma’s] funeral, but then I got a bowel blockage. When they realized I needed surgery, they sent me to Keck.”

A parastomal hernia was discovered to be the culprit of Benton’s bowel obstruction, and because of his complex medical history, he needed the higher level of care that Keck Hospital of USC prides itself on providing.

“He had a history of tongue cancer, bladder cancer, hypertension, diabetes, atrial fibrillation and sick sinus rhythm, so he had a pacemaker,” says Jodie Murakami MA ’16, OTD ’17, an assistant clinical professor at USC Chan and occupational therapist at Keck Hospital. “He was a high-risk surgery, so he was transferred to our special needs center.”

Benton underwent surgery to repair the hernia and place a feeding tube in January, but his recovery was marked with a litany of complications including a lower intestinal infection, pneumonia, abdominal abscesses, hyponatremia, malnutrition and a sacral wound.

“I went there expecting I’d be there for a week,” Benton says. “I was there for more than two months.”

When he awoke from surgery, Benton couldn’t even sit up on his own, a harsh reality for someone who was previously independent. “I thought I was going to die right there in the intensive care unit,” he recalls. “I never felt so bad in my entire life.”

Getting up and getting on

That’s when he met Murakami, who would not only serve as Benton’s occupational therapist but also as his long-term advocate and confidant. By helping him grieve and cope with the loss of his wife, Benton eventually would refer to Murakami as “his angel.”

Their first order of business was to get Benton standing up, which took the assistance of two people at first. Murakami assessed he had strong arms but weak legs, an ideal candidate for lift equipment that allowed Benton to stand without assistance. “I would just guide him up,” she says. “That gave him the confidence of, ‘Wow, I’m standing.’ Then I took off the footplate to give him the actual feeling of standing. A few days later, we put the machine away, and he stood up by himself.”

These were the small advances Murakami used to encourage Benton whenever he got down on himself. Another motivational method she used was to take photographs of Benton’s achievements — standing up, getting into a chair — and print and post them on his hospital room wall. “I’d put them right where he could see so he wouldn’t forget all the progress he made.”

Once Benton was walking, Murakami helped him relearn everyday activities such as bathing and getting dressed.

“With his stomach pain, I had to show him different ways of putting on his socks, shoes and pants to avoid bending,” she says. “When you meet the patient, you have to take time to learn about them, not just their physical needs but what they enjoy, their history, what they like to do, what’s meaningful. With OT, we have the ability to not only strengthen and assist with balance and walking distance, but also give them a sense of themselves again. I think George forgot.”

Benton hadn’t been outside in a month, and once Murakami took him out in his wheelchair, she noticed a difference in his overall demeanor. He started to open up and slowly began to envision life after the hospital.

“At first, he wasn’t ready to talk about his wife. Every time I tried to ask what he liked to do, it always included his wife, and that made him sad. So I started talking about moving forward — about his children and grandchildren. We talked about his 30 years in the Air Force and his career as an electrical engineer. I noticed he started talking about his wife in past tense. Then a month out, he’d say things like, ‘What kind of electric scooter should I get to go to that shopping center by my house?’”

Even though Benton was still experiencing abdominal pain, Murakami fought to get him transferred to Keck Hospital of USC’s intensive inpatient acute rehab unit, rather than be discharged to another facility.

“He was making progress, but it was slow and the wounds on his abdomen weren’t healing that fast,” she says. “I knew he would recover much faster in intensive therapy since he was independent at his baseline.”

Murakami’s persistence paid off. After two-and-a-half-months through Keck Hospital’s continuum of care — from surgery to intensive care to inpatient rehab — Benton was discharged in early March. He is now back at his Huntington Beach home, living with his granddaughter. Though still in a wheelchair, Benton says he’s around 70 percent back to normal.

“I have PT and OT twice a week,” he says. “I also have a home health nurse who comes in three times a week. I go out in the backyard and walk around with my walker every day. I plan to start getting out more often as I’m feeling better.”

While Benton is focusing on the future, he can’t help talking about his gratitude for the experience at Keck Hospital of USC.

“That is one fantastic hospital,” he says. “I had the best people in the world taking care of me. They gave me such great care. I’m completely indebted to them. I’ve been in a lot of hospitals, but none compare to Keck. On a scale from 1 to 10, they’re a 25.” 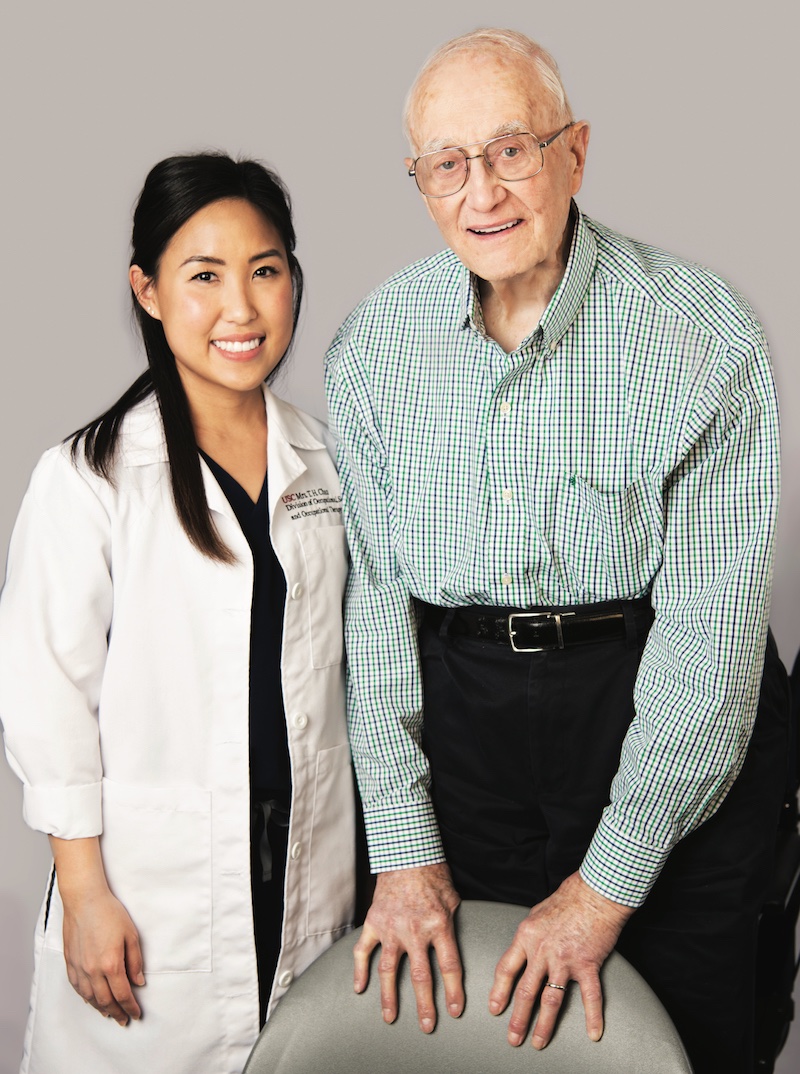