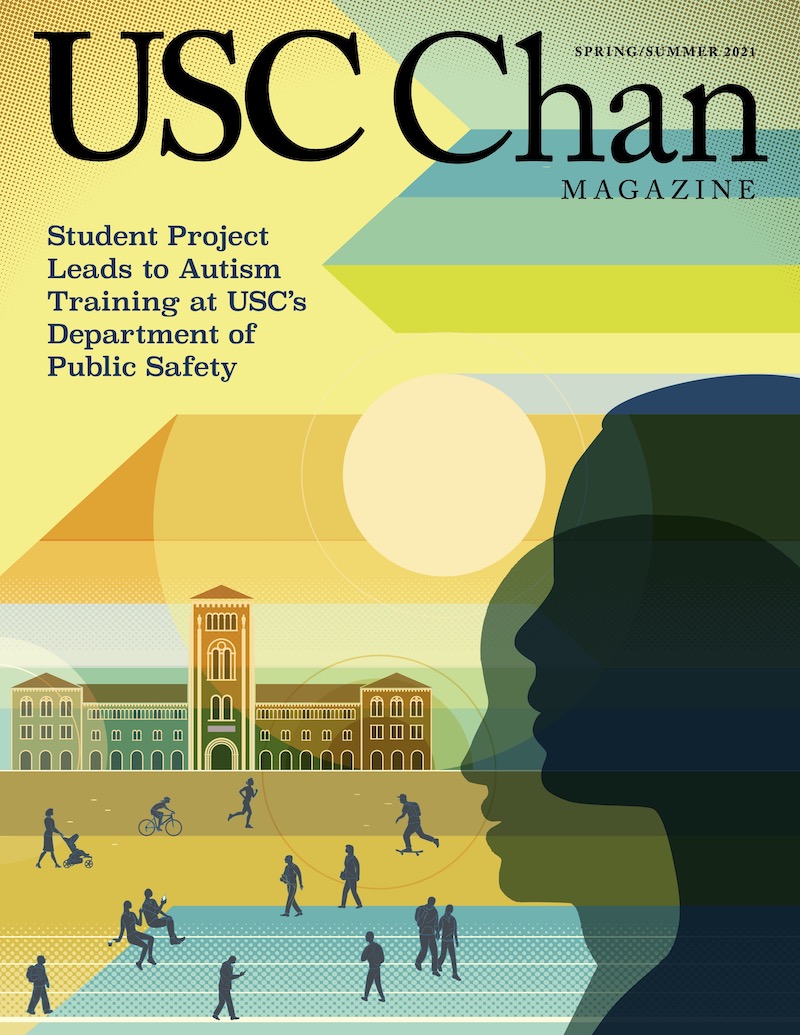 As master’s students at the USC Chan Division of Occupational Science and Occupational Therapy, the two wanted to make a difference in their local community by promoting education and awareness about a topic that’s personal to both: autism. 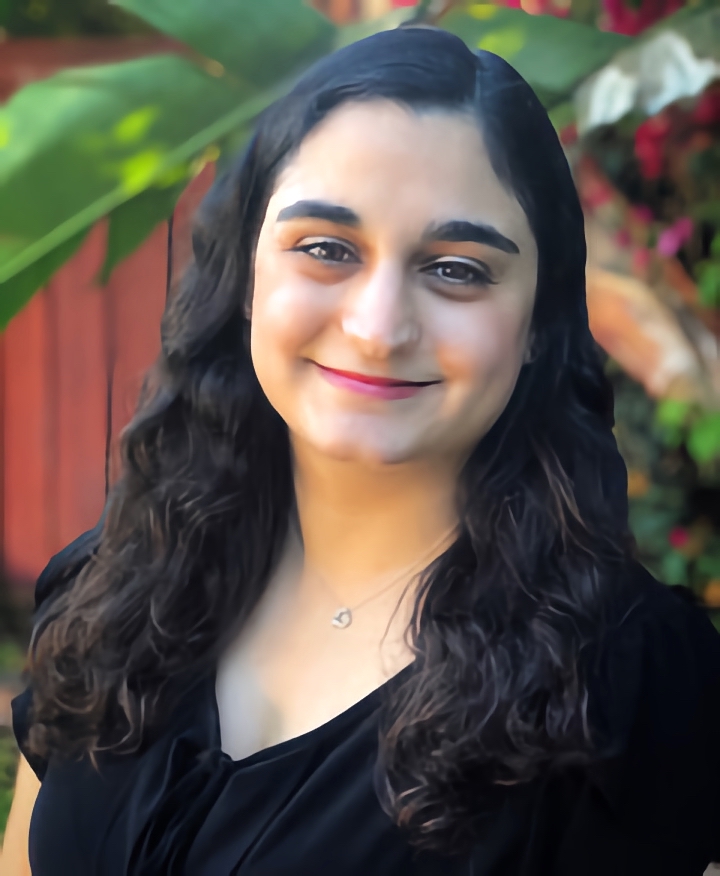 After seeing extensive news coverage on negative interactions with law enforcement last year, the pair knew they wanted to share their experiences and knowledge with a local agency, but the Los Angeles Police Department seemed like a tall order. The two ultimately decided to focus their attention much closer to home and start with the USC Department of Public Safety.

The hope was to educate the department, commonly known as DPS, on what signs to look for and how those signs can often be misinterpreted by those who are unfamiliar with autism.

They were initially worried about how their proposal would be received, but that concern quickly faded as DPS welcomed the idea with open arms.

“We didn’t want to present this in a way that would make them feel defensive or that they had done something wrong because that’s not productive,” Caris says.

“We wanted this to be positive and productive, which is hard when you’re talking about things that people have done wrong and what not to do, but I think at the end of the day, we were very pleased with the feedback we received.”

Earlier this year, the pair gave a series of eight presentations, starting by defining autism and explaining the terminology used in and by the community. That was followed with examples of behaviors that people with autism may exhibit and why, along with examples of positive and negative interactions with law enforcement.

It was so well-received that DPS has decided to implement the duo’s autism training on a yearly basis, and offer it to other agencies around the L.A. area as well.

Caris is autistic, and both she and McGuire have close friends with autism. They often wonder how certain behaviors might be perceived by others with little knowledge of autism or interactions with people with autism.

“I’m able to verbally communicate a lot of things, but I know there are a lot of people who have autism, and other special needs as well, who really struggle with that,” Caris says.

Autism affects people differently and to varying degrees, making it a “spectrum condition” that can impact social skills, communication, relationships and self-regulation, among other challenges. It is also much more common than many realize, with prevalence in the United States estimated at 1 in 54 births, even though numerous studies have shown that autism is actually underdiagnosed, especially among females and in Black and Hispanic populations. 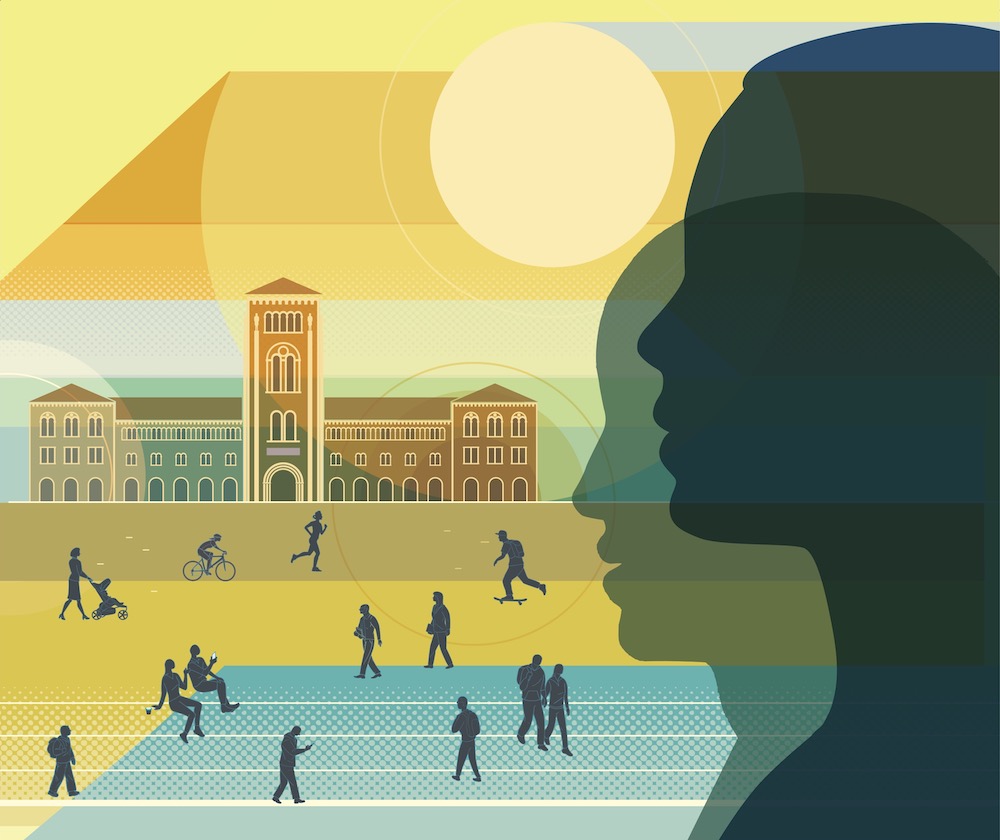 USC Chan has an Autism Initiative, part of which includes opportunities for doctoral residents to contribute to research teams and develop programs that have positive impacts for those on the autism spectrum and their families. Professor Mary Lawlor heads the initiative, which she says works to promote greater inclusivity for people on the autism spectrum through various community engagements, including this project with DPS and partnerships with museums to adapt their environments to support the sensory needs of people with autism.

Caris was a fieldwork student under Lawlor, who says the work with DPS shows what can be accomplished when both sides are willing to learn and engage.

“I think Monica and Riley did a wonderful job of establishing a collaborative process,” Lawlor says. “It’s important, when thinking about moving forward with opportunities for people with autism, to make sure that we’re really collaborating and understanding how we can be supportive of our partners, which in this case is the police.”

“For someone in law enforcement, they might take that as, ‘Oh, he’s not listening to me, or he’s not showing respect, or he’s high or something like that,’” McGuire says. “So we’re really trying to illustrate that if you see someone doing a lot of these behaviors, just stop and take a second to think about what might be going on.”

For some at DPS, like Assistant Chief Alma Burke, those signs are nothing new. Burke, who stepped into her role in late 2019 following a 24-year career with the Los Angeles Police Department, grew up with a brother with autism, so she was fully on board when Caris and McGuire proposed the autism training.

“Not only did they present the topic, but they really came with several solutions to how we interact with people with autism,” Burke says. “When I would tell them about the experience, we just had a really great conversation about how we can deliver this type of training. Riley and Monica formatted the information to where they could deliver it but also really connect with the officers.”

Autism wasn’t well understood when Burke was growing up, so all she knew was that her brother had trouble interacting with others. He was nonverbal and sometimes prone to aggressive behaviors. Despite what many of her family members said, Burke made the decision early to help maximize his participation out and about in the community — taking him everywhere from the beach to the park, from sporting events to Disneyland.

“I would tell my parents, just because this is a challenge doesn’t mean we can’t do it,” Burke says. “For a long time, my parents just didn’t want to take him anywhere. I would take him everywhere because I wanted to show my family that it could be done, that we could get him to experience society.”

Burke’s brother passed away in early 2020, less than one month after she began working at USC. So later that year, when Caris and McGuire approached her about their capstone project, Burke admits she was a little emotional.

“When the students approached me, it was an immediate, ‘Absolutely,’” Burke says. “I was really proud of our two students’ amazing work ... and now we’re going to teach this training every year, and we’re going to continue to talk about it.”

The autism training was held over eight sessions earlier this spring; due to the pandemic, all of it was done online. As important as it was for Caris and McGuire to format their presentation appropriately, it was just as important for DPS to take in the information and recognize the needs of the community they serve.

“Our command staff recognized this both as a need for our industry but also as an opportunity that we could not fumble,” says DPS Sgt. Rick Roseli. “When somebody with a very important relevant topic has reached out to us wanting to be part of a solution, we need to recognize the importance of that.”

Roseli says any new training in law enforcement can be met with some skepticism from officers. But having Caris, McGuire and especially Burke share their stories gave the message a much more personal tone. And ultimately, Roseli says many officers had an “aha” moment after learning the various behaviors associated with autism.

“We’ve all dealt with scenarios in the past that now cause you to reflect and think, if you had to do it over again with this knowledge, what options would you have?” Roseli says. “This is what we’re doing on a constant basis, tailoring our approach each and every time to the individual that we’re contacting.”

Going forward, the hope is to spread the autism training to other agencies that might be interested. Both Burke and Roseli say they’d love to have Caris and McGuire come back to teach it year after year, and the two students seem to be up for it, now that they have started the occupational therapy doctorate program at USC Chan.

“We’ve already talked about that, and I said, ‘I’m latching on to the two of you,’” Burke says with a laugh. “We’re going to make sure that what we started here continues somewhere else.”

Caris and McGuire want to make sure that happens, too. They’re proud of what they started, and the changes that it will hopefully bring to the USC community.

“That was the biggest thing for us, that we’ve made a difference,” Caris says. “People are reflecting, and reflecting back on your past is the first step toward changing your actions in the future.” 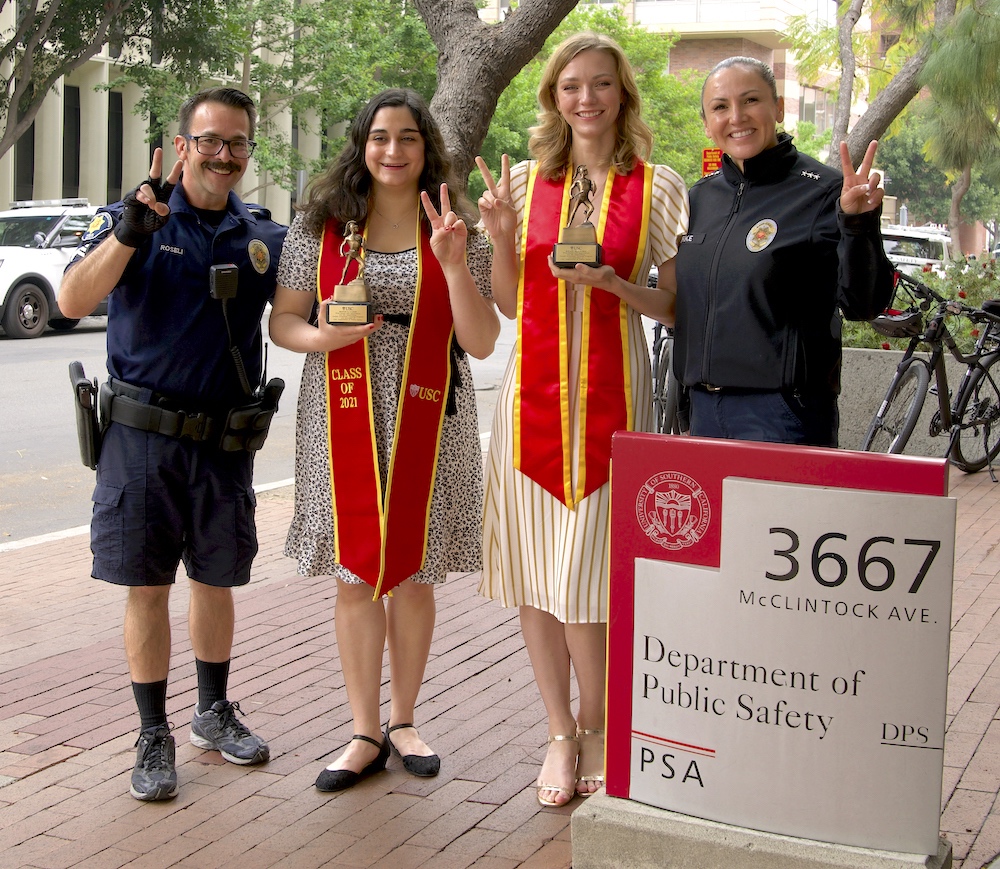 This program began as a leadership capstone project in Fall of 2021. The idea was presented to members of DPS, including Chief John Thomas, Assistant Chief David Carlisle, Training Coordinator Sergeant Ralph Roseli and Assistant Chief Alma Burke, now Director. It was welcomed with open arms, particularly by Burke whose autistic brother had recently passed away. We could quickly see how impactful this would be for our campus community.

When creating this training program, we integrated research findings, recommendations from autism agencies and media footage of past law enforcement encounters, and then utilized a focus group of USC Chan students and faculty to ensure that our curriculum was as comprehensive and as representative of the needs of autistic people as possible. This focus group also provided valuable suggestions regarding the structure of our presentation, as well as modifications to the method of delivery, which could best support learning. The presentation draft was then sent to DPS members to review prior to scheduling the dates of the training sessions. The live sessions were recorded, and DPS made it mandatory for their entire department to either attend a live session or view a pre-recorded session. We hope to deliver in-person training sessions in Spring 2022 and we look forward to continuing our relationship with DPS!