February is Black History Month, and Student Ambassador Erika Lim MA ’18 spoke with master's degree student Kim Jones MA ’18 about what led her to occupational therapy, her experiences as a student at USC Chan and how identity, authenticity and diversity enable occupational therapists to provide the best service possible. 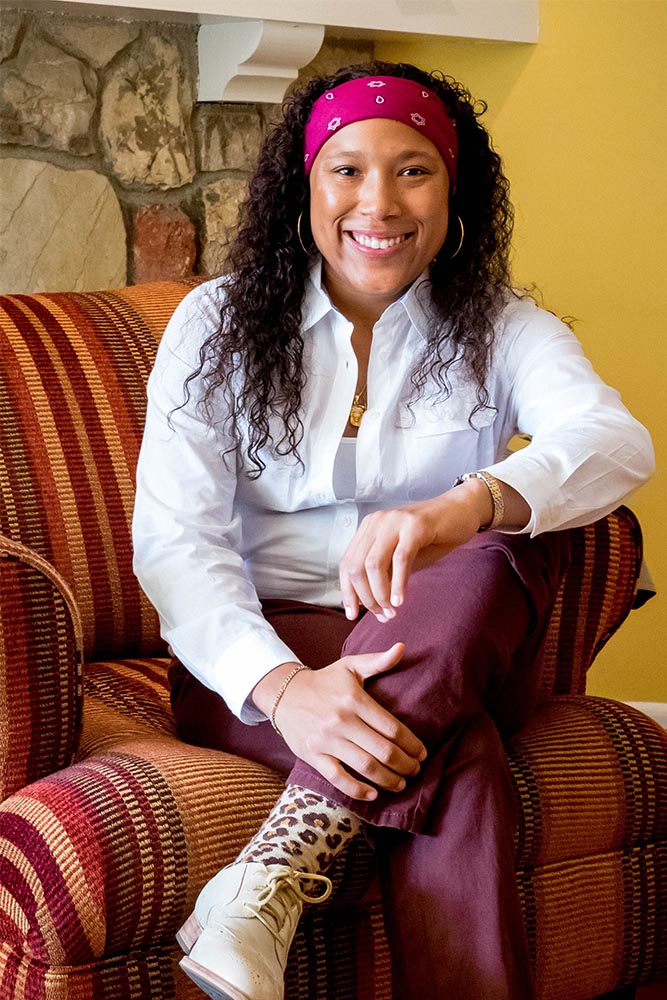 Thanks for meeting with me, Kim! Let’s start with the simple stuff: Why did you choose to pursue a career in occupational therapy?

I was in an Intro to Kinesiology class and the professor was talking about this “holistic perspective” and how occupational therapists believe in impacting people as whole people instead of just working solely with their body. I thought that was really cool.

I ended up calling my mom and after describing it all, she said, “You know what? That really sounds like you.” Everything my mom says is like gospel to me, so I was like, “Okay, this is just more affirmation of what I’m supposed to do.” That’s how I decided to pursue OT. Then, I started to volunteer with different OT sites with children. I always knew it was going to be [working with] kids, probably because I tend to act like one sometimes.

How has your experience been in the OT program? Has the program lived up to what you were hoping for or expecting?

Going into the program, I thought master’s students were supposed to have so much work to do that they can’t function. Then, when I got here, and it was heavy in theory and less “busy work,” it kind of threw me for a loop. But when I look at other people in the profession or students coming out of the program, I realized that at USC, we learn how to think. As opposed to just learning this method or that intervention, you learn how to actually take the time to think so you can figure out what to do in any situation and why.

In our Therapeutic Use of Self class, Professor Linda Fazio would explain that where we come from influences how we practice, and the importance of being authentic. Tell me about a time you’ve felt completely authentic, and how it worked to benefit the way you practice.

The experience of losing my hair when I was 10 due to alopecia areata has influenced what I bring to practice. Hair holds a lot of meaning in black culture and honestly, at that time, I felt worthless. I had to go to therapy. I had to develop some type of self-confidence because I was being bullied. It was hard.

I think the reason why I’m so attached to kids and people in general who have disabilities is because I have that insight of loss. A loss of something that prevented me from doing a lot of things. I couldn’t ride roller coasters because I was worried about my wig or scarf falling off. Now, I wear a bandana almost every day as a symbol of overcoming that time in my life and at the same time appreciating it. Understanding the idea of not having access to participation is what I think separates me as an occupational therapist and is what I bring to the table. 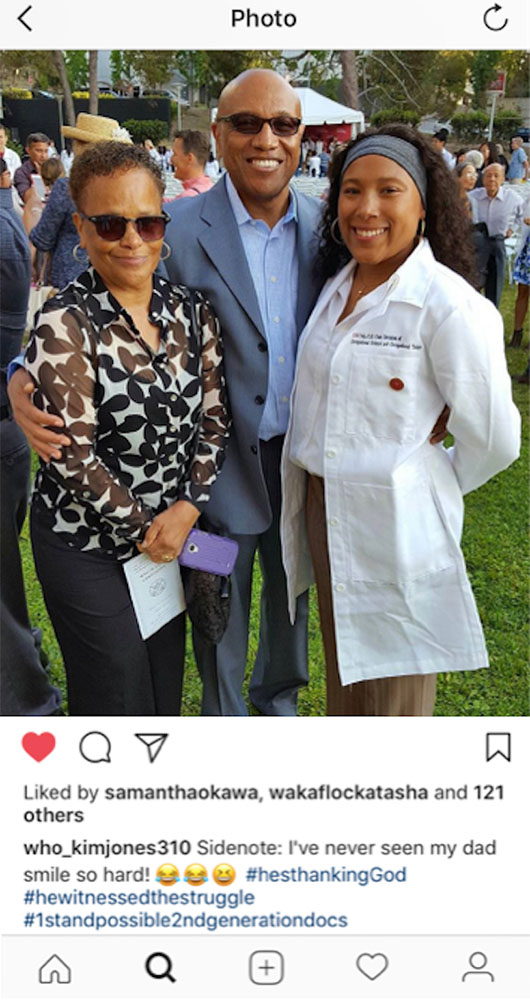 You have an Instagram post from our White Coat Ceremony with your parents and the caption says, “Sidenote: I’ve never seen my dad smile so hard.” What is he smiling about?

As an only child, there was always an expectation that I was going to be somebody that had a profession. I initially pursued animal sciences to become a veterinarian because, one, I love animals, but two, I knew that my dad would approve of me being a doctor. Now that I look back at it, he really just wanted me to not have to go from job to job or have the risk of losing a job, because that was something both his mother and he experienced. He wanted me to be a professional so that it could be something I could feel secure in.

We’re currently in Black History Month. In your words, what are we honoring or celebrating?

Here we go. Black History Month. They should just call it American History Month (other than the actual Native Americans that were originally here.) Not many people know this, but back in the day, during slavery, masters would occasionally allow slaves to not work on Sundays. They had just enough freedom to not try to escape or revolt. Black History Month is kind of a symbol of that. Okay, we’ll give them this month but what’s going on in the other 11 months throughout the year? Even in that month, black people are still being wrongfully convicted, incarcerated disproportionately, and subjected to police brutality. So I turn it around on you; What are we honoring or celebrating?

Our society and economy was built on black people, on slavery. When you build something and the foundation is treated so terribly, things tend to fall apart. I’ve always been told that I need to try three times as hard to get half as much, and unfortunately, that’s reality. I’ll tell you though, if I had a choice, I would still rather be black.

Black people have this great way of embracing things that they shouldn’t necessarily embrace, and turning it on its head. Like when you look at the culture of hip hop, they took what would typically be labeled as growing up in a bad situation and created a movement towards awareness, political action and equality.

So while I think Black History Month started off with mixed intentions, we’re gonna take it. We’re taking our lives back. We’re taking this month back. We’re creating our own thing out of it. That’s what’s beautiful about being black.

Why do you think it’s important for there to be more diversity in healthcare?

When [a healthcare provider] comes in and looks like them, [clients] are more inclined to be comfortable. OT especially runs off that comfortability and that therapeutic relationship. You need to know how to respond to and relate to your client and understand the different rules of the culture as opposed to taking offense. We are less inclined to have those misconnections if the person you are treating looks like you or understands where you come from. 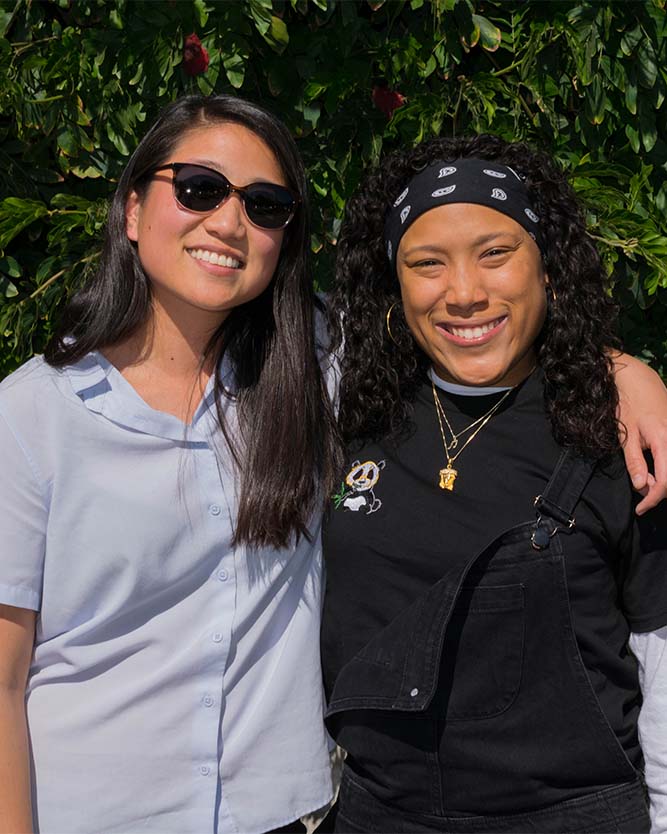 Let’s talk about the doctorate degree. I know it’s been a process for you on deciding to do it or not. Where are you at with it?

I will get my doctorate in occupational therapy at some point. I think it’s important because personally, I feel like I’m supposed to have some type of administrative role in the school district. The only way to really create change is at the top. Even though we do great work on an individual level as OTs, a lot of problems are systematic. The doctorate puts you at a level playing field with other professions. I really feel that the more we expose people to OT’s way of thinking at the administrative level, the more we can change as a society.

I believe that completely. Thanks for chatting with me and for being so open; Cheers to our last semester!

Next is China Initiative Visits Beijing and Kunming | March–April 2018

Next by tag  Academics and Courses > Diversity, Access, Equity > Students >