Racing Toward the Finish Line 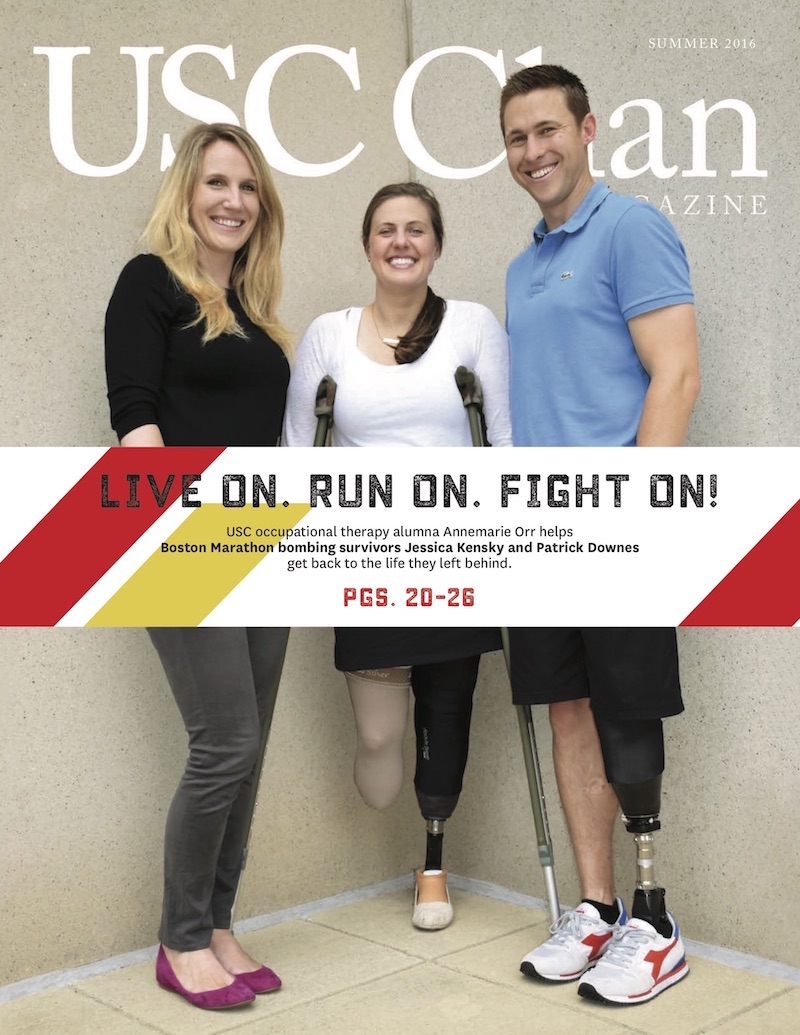 How do you decide to amputate your leg? That was the impossible question Jessica Kensky faced two years ago at Christmas.

Kensky and Patrick Downes, her husband of six months, both lost their left legs below the knee in the Boston Marathon bombing. The blast, one of two successive detonations at the race’s finish line, also tore off the heel pad and Achilles tendon on Kensky’s right leg. 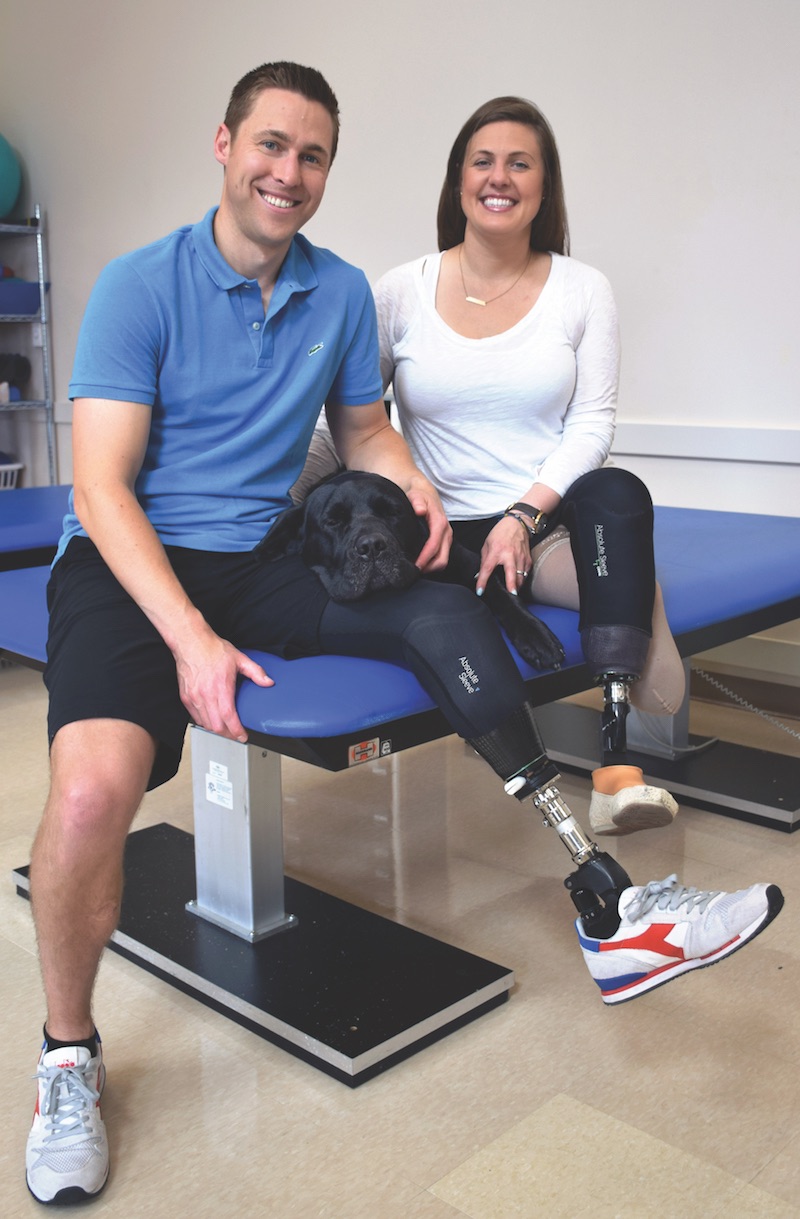 For about a year following the 2013 terror attack, Kensky saw countless doctors and underwent several surgeries to repair her right limb.

“My leg was so badly damaged and I was in so much pain, I felt like it was gone in a lot of ways — at least the healthy leg I knew,” says Kensky, a registered nurse and avid runner who, along with Downes, had competed in the Boston Marathon prior to 2013. “How does one begin to decide if they’re going to keep a limb or not? It’s such a bizarre, unimaginable situation to be in.”

Unlike the civilian world, the facility features state-of-the-art technology and specialists who treat military blast amputees in one centralized location and fosters the kind of camaraderie that only comes from sharing a space with individuals recovering from similar injuries.

“Jess wanted to return to the life she had before,” says Annemarie Orr ’07, MA ’09, OTD ’15, Kensky’s occupational therapist at Walter Reed Bethesda. “She wanted to take the [subway] to the grocery store, cook a meal for her husband and entertain, go back to work as a nurse and walk her dog. She would say, ‘I’m living my life in 20-minute increments.’ She could only tolerate standing for that long.”

As Kensky and Downes left the base in 2014 to spend the holidays at home in Boston, Orr gave Kensky a binder, complete with a cartoon of the couple and their dog on the cover that said, “Track Yourself a Merry Little Christmas.”

The binder was meant to help Kensky track her daily activity — how long it took to accomplish tasks, her pain level and her perception of her own functioning.

“It was a good way for her to very plainly and clearly see what her life was like and whether or not she needed to amputate and move forward with that decision,” Orr says.

“What she did was so personalized; she knew I was a nurse, and I wanted scientific evidence that said I should not keep my leg,” Kensky adds. “After charting for a couple of days, I stared at this binder. In my gut, I knew I couldn’t live with this leg.”

“I had never made a decision like this before — I can’t compare it to anything else,” Kensky continues. “Even the huge decision of who you’re going to marry is something that you can technically undo; this is cutting off your limb. Annemarie helped me really come to my own conclusion very naturally and very confidently; it was such an incredible gift. I don’t know even now if she realizes how important that was to me.”

Kensky scheduled her surgery at Walter Reed Bethesda for January 2015. Her first amputation happened without warning or consent. But now Kensky found herself in another unimaginable situation: How do you say goodbye to your right leg?

“Jess came in [the day before her surgery] and said, ‘What do I do? Do I have people sign it?’ We went through all these different things that didn’t seem right,” Orr says.

Orr remembered a patient with a double amputation she once treated whose grandmother had porcelain plates of his footprints as a child hanging on her wall. “For him it was difficult but really neat to go back to his grandmother’s house and see that she still had his footprints because that was all he had left of both of his feet,” she says.

Orr designed a therapeutic activity in which Downes and Kensky — along with their service dog, Rescue — painted their right feet in blue and yellow, colors that have come to signify solidarity in the bombing aftermath, and stamped their footprints on a page.

“We got really into it. We were laughing and making jokes like, ‘this art will be worth twice as much tomorrow,’” Kensky says. “So much of it is how excellent Annemarie is at reading her patients. That’s not a therapeutic exercise for everyone, but for me, it really was.”

Following her surgery, Kensky continued her occupational therapy with Orr, this time with bilateral below-knee amputations.

At Walter Reed Bethesda, Orr and two other staff occupational therapists in the medical center’s amputation service cover everything from basic self-care, like dressing and bathing, to returning to community activities and reintegration.

“Annemarie never said ‘I don’t know’ or ‘You can’t do that.’ It was always, ‘Show me the mountain, and I’ll tell you how we’re going to climb it.’”

“For Jess, it was a lot of how to get around in her wheelchair, how to go out and grocery shop, how to bathe her dog safely and take him out for walks,” Orr explains. “And getting her back into the community socially so she was confident with her amputations, mentally and physically, so she’s independent with and without her prosthetics.”

While Orr had worked with many service members and their families at Walter Reed Bethesda, Kensky and Downes posed a unique challenge. “Jess’ goals are different than a lot of the service members,” Orr says.

“We were also working with a husband-and-wife team, which was a new experience for a lot of us.”

Though he was by Kensky’s side throughout her rehab journey, Downes was further along in his own recovery process.

“I’m an amputee in a very different way,” says Downes, who recently ran the 2016 Boston Marathon, finishing in under six hours. “I’ve been learning to see the world through my new set of eyes, and I also need to be able to look at it through Jess’ eyes, and Annemarie made that happen.”

“She helped to get a real sense of where Jess was physically, and the implications for that psychologically, and how I could do little and subtle things throughout our day to assist her in ways that wouldn’t really highlight her disability but would make the world feel more accessible.” 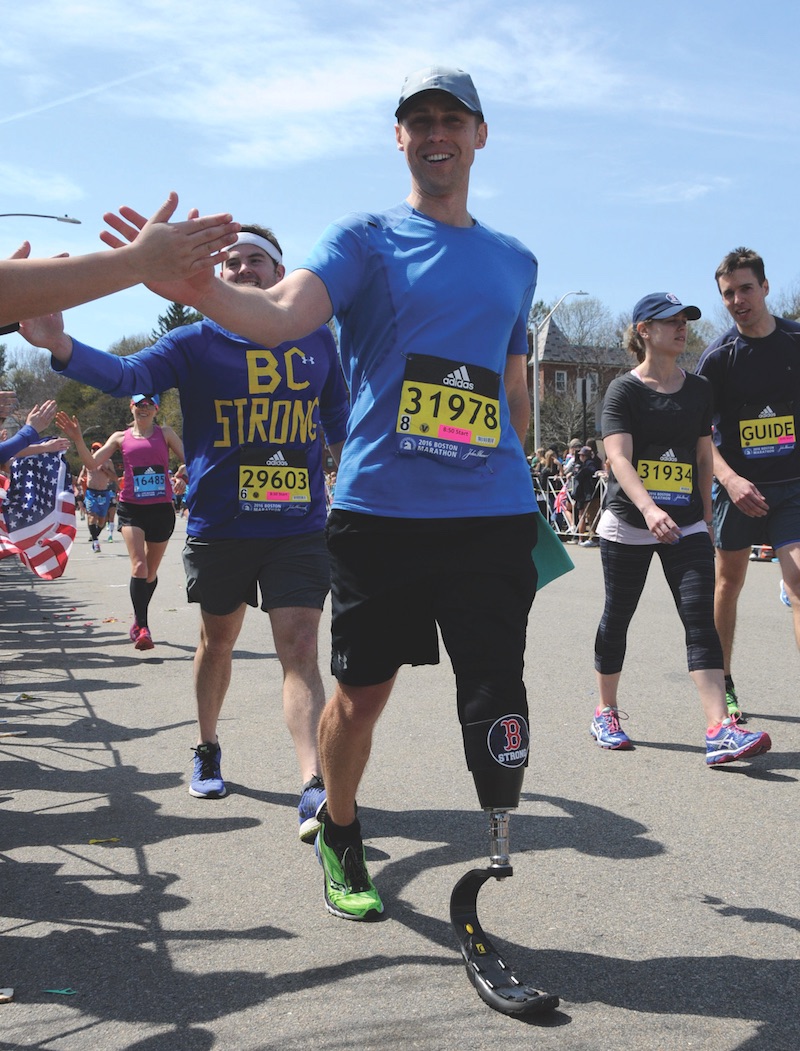 Downes ran the 2016 Boston Marathon on a blade, finishing in just under six hours | Photo by Marathonfoto

Orr and Kensky instantly had a connection that went beyond the clinic: both are runners in their early 30s, health care providers and California natives.

“If I’d met her any other way, we would’ve gravitated toward each other,” Kensky says.

Orr also saw reflections of herself in Kensky. “You can’t help but see what she would want her goals to be and how similar they are to what mine would be,” Orr says.

Those goals can fluctuate during the many months of rehabilitation. After her second amputation, Kensky refused to shop.

“I had gained a lot of weight; I was depressed and going to a store was overwhelming because people would stare at me,” she says. “I didn’t know what to wear now that I had these two giant prosthetics.”

Orr and Kensky’s physical therapist took her — and Downes’ credit card — on a surprise shopping spree. “There was a lot of OT involved, too,” Kensky says. “Skinny jeans are in style, so Annemarie taught me how to dress my prosthetics by pushing them through the jeans then putting them on my legs.”

But, more than keeping up with the latest fashion, Kensky was learning to feel like herself again.

“She knew as a young woman that it was really important for me to get a pair of jeans, learn how to shoe shop without crying,” Kensky says of Orr. “The clinical and logistical parts overlapped, but it was wrapped up in my psyche, too.”

Along with Downes, the pair game-planned for Kensky to attend a rustic farm wedding as a bridesmaid, including finding pictures of the venue to strategize what Kensky would need to navigate stairs or use the bathroom.

“I had four different assisted devices, including a modified scooter, to get through this wedding,” Kensky says. “I could sit ladylike and when I went to give my speech, I was pushed to the front and I had a basket with my speech, my bouquet and my glass of wine. That wasn’t the original intent of that device, but that helped me meet my goals and my needs at that event.”

Downes adds that more than just moving through the event, Orr helped Kensky maintain her femininity.

“You can scoot up stairs but it’s not the easiest or most appropriate thing to do in a bridesmaid’s dress,” he says. “It’s about how to maintain your dignity and get where you need to go and participate in the activities you want to participate in.”

Adds Kensky, “OT is so unique because what’s important to me becomes her goals too. It always felt like she was on my team.” 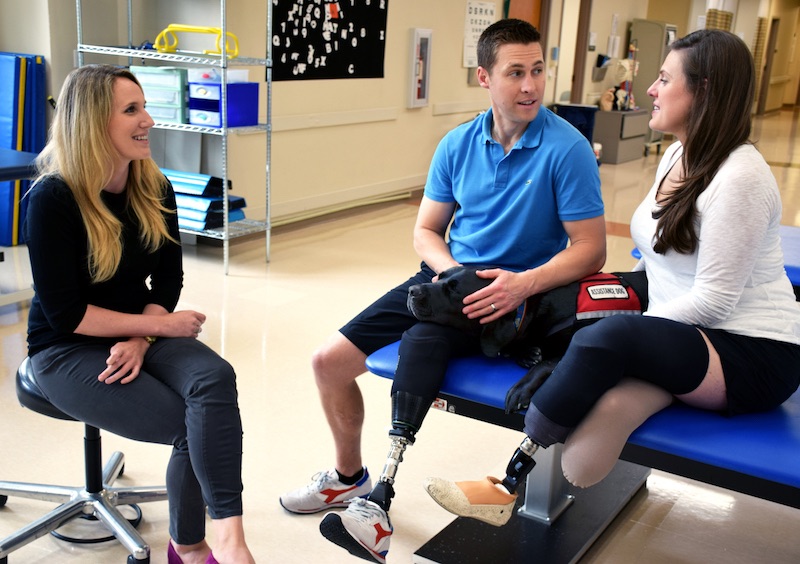 A Long Road to Recovery

Three years after the blast, Kensky is still on the road to recovery.

“I thought I was going to make this horrible decision to amputate my leg, and after that, it was going to be smooth sailing,” she says. “And it hasn’t been that way at all.”

Since her voluntary amputation, she’s undergone another 10 surgeries, most recently to reattach a segment of muscle in her right leg.

“I was in so many different phases: a new amputee on the left, limb salvage on the right, then bilateral amputee, then mobile bilateral amputee,” Kensky says. “I wouldn’t know how to get through all these stages without Annemarie at my side.”

While Kensky is still a patient at Walter Reed Bethesda, she’s finished her occupational therapy. Still, she says, “I feel like I can think like an OT; I can hear Annemarie’s voice in my head.”

And that guidance continues to help her face physical and psychological challenges with confidence and purpose.

“I have a whole life ahead of me and my legs aren’t growing back,” she says. “Annemarie never said, ‘I don’t know’ or ‘You can’t do that.’ It’s always, show me the mountain, and I’ll tell you how we’re going to climb it. It’s an amazing profession. I think had I not been a nurse, I would have been really happy being an OT.”

It’s been more than three years since their lives were forever changed by a terrorist attack. Here are some of the milestones from Downes’ and Kensky’s journey:

April 15, 2013
Kensky and Downes both lose their left legs below the knee in the Boston Marathon bombing.

December 2014
With the help of Orr’s charting task — measuring how long it takes to accomplish daily activities, her pain level and her perception of functioning — Kensky decides to amputate her right leg.

January 21, 2015
Kensky undergoes voluntary amputation of right leg, which had not healed properly since the terror attack.

April 18, 2016
Downes completes the Boston Marathon in just under six hours on a carbon-fiber, blade-shaped prosthesis.

May 17, 2016
Kensky has the 10th surgery after her voluntary amputation, this time to reattach a muscle segment on her right leg.